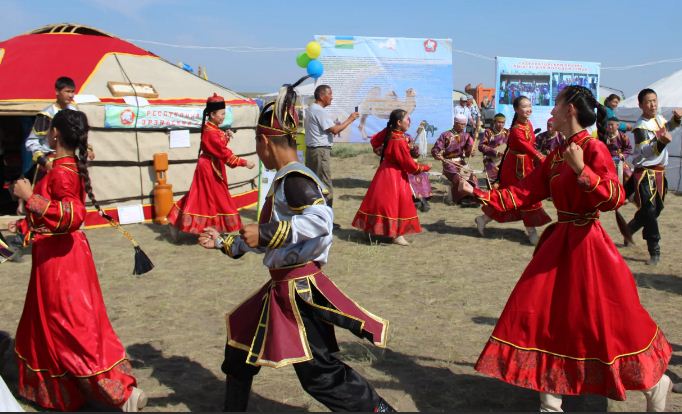 The Naadym is Tuvan version of the Naadam traditional festival of Mongolian stock-breeders (arats). This celebration is associated with annual tribal sacrifice in honour of the head local spirit and spirits of the ancestors. In the Soviet period the Naadym was abolished as a dark legacy of the feudal last and it was restored since 1993 only. Now the Naadym is held yearly in the mid-August not far from Kyzyl city. Programme of the holiday includes the national wrestling kures (this competition with participation of guests from Buryatia, Mongolia, Chinese Inner Mongolia is the most popular event of the festival), racing, archery, lifting of heavy stones, competitions for the best national yurta (ger), the best national costume and the best equipment for the horse, performances of folklore dance and song ensembles. At the grandiose fair arranged on the grounds of the festival you can taste dishes of national cuisine and purchase authentic original souvenirs: livestock utensils, national clothes, different felt products, Tuvan musical instruments and handmade products of local craftsmen. 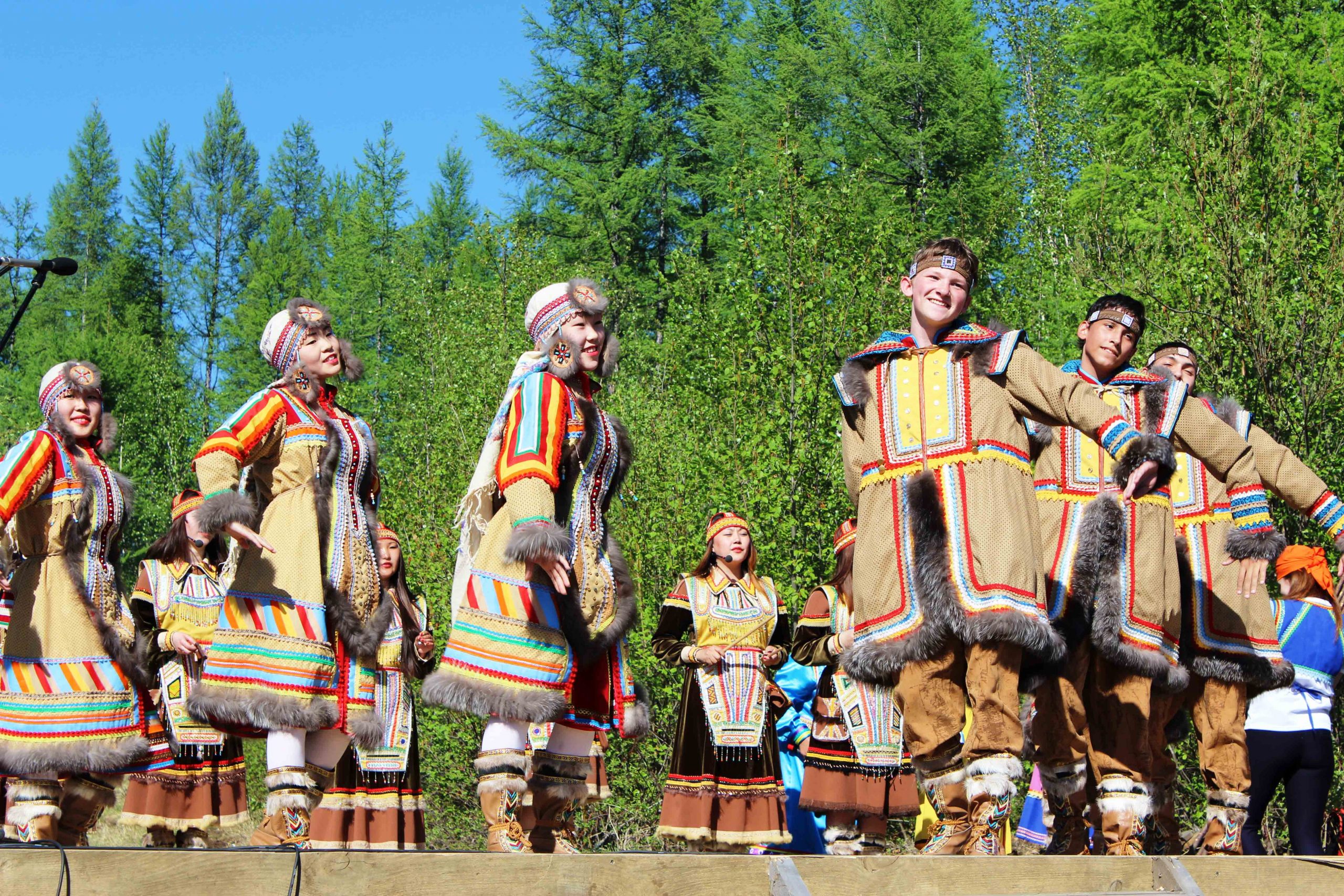 Evenks is one of the main aboriginal peoples of the Krasnoyarsk Territory. This Tungusic people populated vast area of East Siberia and the Russian Far East from the Taymyr Peninsula in the north-west till the Amur River in the south-east. An ancient Evenk tradition of the New Year celebration in early June is directly connected with period of the awakening of inclement Siberian nature after very long and cold winter. Place of the annual Muchun celebration is Tura settlement located in the middle part of the Krasnoyarsk Territory on the bank of the Nizhnyaya (Lower) Tunguska River. Chums (traditional temporary tent dwellings of the Uralic nomadic peoples) representing reindeer-breeders communities and regional educational, cultural and industrial institutions are pitched directly in the taiga forest. Guests of the festival have the opportunity to taste national food, to see the exhibition of decorative applied arts, to take part in workshops and to watch reindeers, as well as to participate in the national sports (lasso throwing, national wrestling, jumps over sleds, archery etc.). The essential part of the event is demonstration of the ancient Evenk rituals traditionally held during the Muchun. With the help of the Osittain Evenk folk ensemble everyone is able to undergo the 6-stage rite of purification (Ikenipke), the rite of the Coracana (fences for reindeers) fumigation and a ritual presentation to the spirits of nature. In breaks between the rituals performances of folklore songs, dances, thematic sketchs and the Evenk national clothes demonstrating are presented for the audience. Grounds of the Muchun Festival is ideal place for purchasing of original authentic Evenk souvenirs. 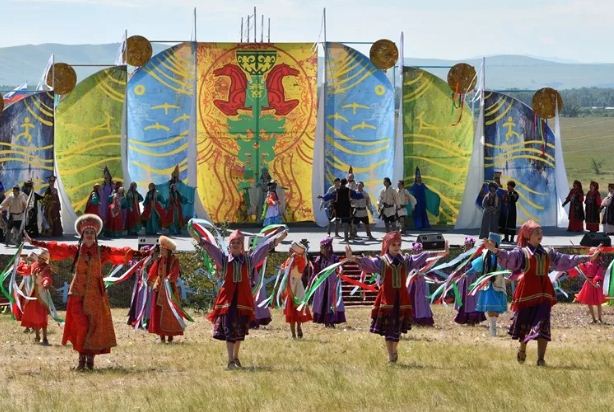 The Tun Pairam is one of the most ancient Khakassian people folklore holidays celebrated since the Hunnish and Old Turkic epochs. This holiday celebrated in late June – early July is devoted to the first milk of new season (first milk of new year grass) and first ayran (traditional sour-milk beverage of Turks, Arabs, Bulgarians, Iranians) made of the first new year milk. Celebration is held at the Sagai Glade (120 km from Abakan and not far from the Kyug Yurta Camp).  At the same time new national dress was sewed. Traditionally the inhabitants of several aals (traditional Khakassian cattle-breeding villages) gathered in the morning at the nearest mountain top where they put birch trees, a hitching post, light a big fire and accomplished ritual performances. The most revered man sprinkles animals, ritual fire, birch trees, hitching post with new ayran blessing the heaven, the earth and asks the cattle and dairy products don’t come to an end. After the end of the ritual part of the celebration  strength and agility competitions are arranged. Archery, racing (chris) and lifting of  stones (kapchan tas) and traditional wrestling (kures) are very popular. All participants of the fesrtival are offered with the ayran and dishes of national cuisine. All elements of this national holiday are saved and annually submitted for the participants and guests. Ritual ceremonies and sport competitions are traditionally followed with performances of folklore ensembles of Khakassia, the Altai and the Mountain Shoria (southern mountain part of the Kemerovo Region). On the grounds of the festival you have an opportunity to purchase products made of ceramics, wood, beads and stone by local masters of decorative and applied arts. 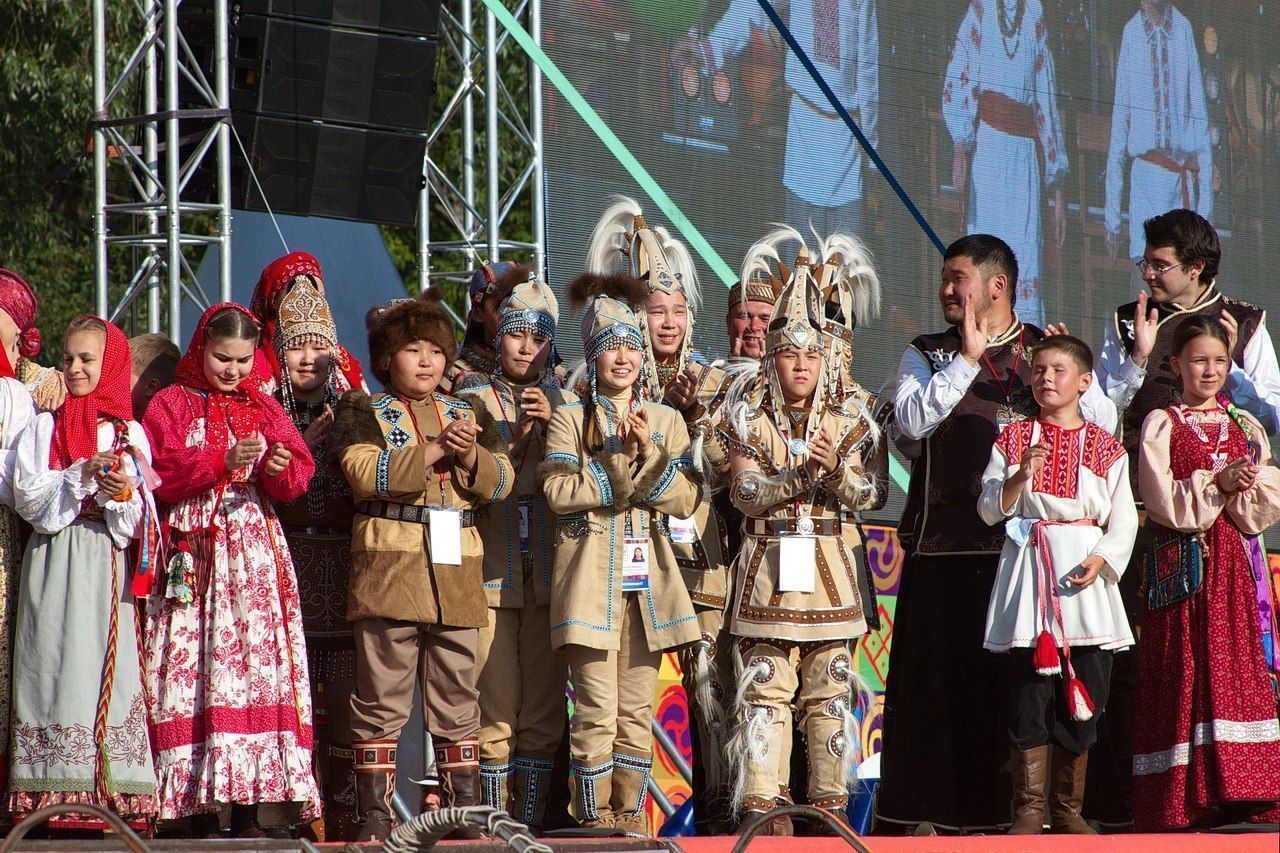 The World of Siberia International Festival of Ethnic Music and Crafts

The World of Siberia Festival of Ethnic Music and Crafts yearly held since 2003 at Shushenskoye ethnographic village in July is the largest such festival in Russia providing its numerous guests with opportunity to join the best samples of ethnic music in authentic atmosphere of Russian village of late XIX-early XX cc. located at steppe zone of the South Siberia and rounded with the Sayan Mountains. Representatives of all genes and trends of actual music art connected with ethnic subjects are welcome. Live music and high quality of the performance is the only condition for all participants of the festival. Everybody can take part in master classes arranged by participants of the festival and in night discos. In the City of Masters traditionally arranged on the festival grounds craftsmen present their hand-made articles and you have a chance to purchase original authentic souvenirs. 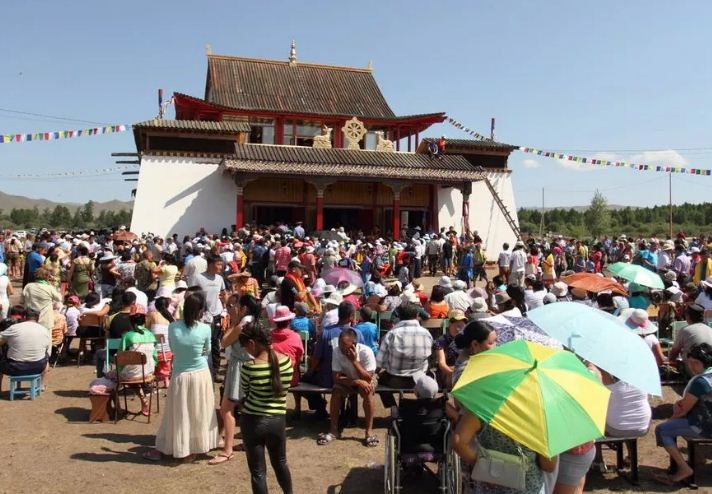 The Ustu-Khure International Festival of Live Music and Live Belief

The Ustu-Khure located in town of Chadan (220 km to the west from Kyzyl) is the largest Buddhist monastery in Tyva built in 1905-1907. In 1930 the monastery was closed and destroyed accordingly to decree of puppet government of the nominally independent Tuvan People’s Republic. Idea of the  of the monastery rebuilding became a symbol of restoration of the traditional Buddhist spirituality in Tyva lost during long Communist period. The annual festival of live music held in Chadan in July since 1999 is inspired with this idea. The Cham Dance (traditional Buddhist mystery play) and other Buddhist rites is indispensable event of the festival programme but participants are not limited with the framework of Buddhism. A motto of the festival is kindness, tolerance and simplicity for the good things of life. Musical programme of the festival is actual kaleidoscope: authentic ethnic music, jazz, ethno-rock, folk, instrumental chamber music and electronic motifs, world stars and enthusiasts from rural cultural center. Throat singing, national instruments are combined here with the cannonade of drum machines and the onslaught of guitar riffs. The simplicity of the living conditions at the tent camp, closeness to virgin nature and to the Buddhist monastery ruins, joint music-making of the participants from different countries of the world create a specific unforgettable atmosphere and unique image of the festival. For a long time the festival was unofficial event, a form of alternative culture. But little by little the geography of participants was expanding, a lot of new international contacts was started and in the end the festival received government support.